Sure enough, even Su Yanzhi needs some time to process such shocking information.
“Milord, your health has not recovered fully. It is best that you rest some more. Your words shall not leave my ears, lest anything be caused that none of us can handle.”
Huh? What the hell! He doesn’t get it or what?
I stomp a foot on the rock. “Did you understand, Master Su? Give it to me straight. I’ll explain it again if you need it.”
His expression turns serious. “If you must know, I have heard of such affairs once in my ancestral home, Yongning. She was the daughter of a rich family in the region. She was dead for two days before coming back to life, saying she was the concubine of some household who was wrongly beaten to death. Her time in the mortal realm was not used up, so her soul was placed in the corpse to return to life. But that family thought, since the body belonged to their beloved daughter, they couldn’t let a lowly concubine dirty her purity. Thus, they sealed her mouth and nose with gold leaf and buried her as though she were always dead.”
He tells this story with a rather light tone, but I’m shivering. I’m not that scared of having my head chopped off, but having my nose sealed, nailed in a coffin and suffocated to death… That’s not much better than death by slow slicing.
Su Yanzhi continues, “I heard yesterday that Your Highness wished to do good from now on. It is said that the first step to doing good is to watch one’s speech and action. My Prince, you are in a position of high status, and all that you say and do is under public scrutiny. Thus, it requires even more conscientiousness.”
I could be a brainless zombie and still understand what he is hinting at. Smart people have smart people problems. They always talk with a potato in their mouth and have to manoeuvre their tongue around it.
He continues, “If Milord truly follows through with that claim and requires help from Yanzhi, then please do not hesitate to send word to the north courtyard. I would defi –”
“All right.” I pick my ear. “If you want to help me, then just say so. Aren’t you sick of beating around the bush?”
He stares at me, and I step closer with a smile. “Don’t worry. I’m not a fool. I only speak frankly with smart guys, so be certain no other person would of this. Let me tell you, my man, I am a good man through and through. You’ll see in the future. Since we’re friends now, be straightforward with me. If you need help, just say the word. I really don’t like the roundabout stuff.”
“A straight man speaks straight words, indeed,” he replies with a wry chuckle.
“I love that compliment!” I rejoice. “Call me Xiaodong when we are alone, and I’ll call you Yanzhi. What do you say? We have to put on a proper show before people after all.” I put on a serious face. “What say you, my subject?”
I finally spot some cracks in his calm facade as he replies courteously. “This subject obeys with respect.”
Mission accomplished! I reach out to pat him on the shoulder, and it’s easy since my new body is around the same height as his. But he suddenly draws back, leaving my arm in mid-air. I realize quickly that he was after all the prince’s male concubine, so maybe he thought that I also bend that way. Awkwardly I chuckle and pull my hand back. “Oh right, could you tell me the way back?”
Su Yanzhi guides me up the path and through the winding walkways, and we arrive at the main courtyard in minutes. Xiao-Shun is squatting with several other servants under the roof chattering away with a few suggestive snickers scattered throughout. All their faces changed to one of surprise after seeing Su Yanzhi and me together. Being the sharpest one, Xiao-Shun shoots to his feet first and stands to attention before me. “My Prince. Master Su,” he greets properly while his eyes wander, studying us.
This makes me uncomfortable. Su Yanzhi says, “Milord, if everything is in order, please excuse my leave and rest well yourself.” Shaking out his sleeves, he abandons me.
Xiao-Shun trails behind me as I enter the small hall and serves tea a little too enthusiastically.
“My Prince, weren’t you supposed to be in the south courtyard? How did you end up in the north…” he carefully presses his voice low and asks.
“Oh,” I answer in a careless tone. “It was still early when I left the south courtyard, and I thought to myself, I haven’t seen Yanzhi for many days, so I decided to pay him a visit. But I lost track of time and stayed until now.”
His gaze shines with reverence. “All my admiration goes to Your Highness’ health and potency!”
I’m sipping my tea when it hits me. The liquid gets caught in my throat, my hands shake, and the tea sprays all over Xiao-Shun. 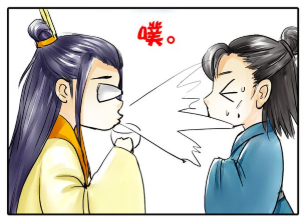