That night, I toss and turn in bed mulling over my next steps. The emperor and dowager are both forces to be reckoned with. Worse comes to worst, I’ll take a slice at the neck and spend more time begging for favours from the department chief. I’ll just start again a baby in some rich family. But right now I got the lives of twenty concubines – if I count the tanhua – plus over a hundred servants in the manor all on my shoulders. The struggle is real. Not to mention the fact that I have a grand mission: to leave my name in history and be praised for millennia.
When the cock crows the next morning, I decide to take it one step at a time. First of all, let’s fetch those two back to the manor. Given the current circumstances, he’s a dead man walking if I relieve him of his new servitude. Virtue does not allow any excuses when it comes to saving a life. But I’ve got to deal with the emperor and all those other princes… Oh, fuck me. It’s like a blade waiting to come down at me no matter what I choose to do, so I might as well do it with a bang!
So today, I get on my palanquin and head for the palace to see the emperor.
The palace is similar to what appears on historical dramas, but even larger. The emperor receives me in Nuanxin Chamber, beside him is of course the empress dowager.
Right when I step in the room, he says, “The seventh prince may forgo formalities,” and prematurely kills my plans to sacrifice my delicate knee caps for my noble cause. I gladly hold my fists before my chest.
“Empress Mother. Brother.”
The emperor nods contently, but the empress dowager doesn’t let me go so easily. She summons for my seat to be placed next to her.
The emperor, Chai Yu, looks to be around thirty or so. His features somewhat take after the empress dowager but are not as fierce. He keeps a neatly trimmed moustache that is so handsome it makes me want to grow one, too. I recite the lines I had prepared the night before.
“Last night, the third brother came to convey Your Majesty’s edicts, and I am forever thankful.” To be honest, I feel a little iffy. I have no idea if I’m speaking the right way.
But the heaven is kind, and I apparently did fairly well. The empress dowager chimes in. “My son, you see I was right. Your little brother is even speaking more properly.”
The emperor nodded in agreement. “Right you are, Empress Mother. The way we see it, it seems the near-death experience has made him more mature and responsible.”
Her face lights up and she is about to jump into a detailed analysis of my improvements. Luckily, the emperor cuts her short just in time. “Empress Mother, if we are not mistaken, the Consort Dowager awaits your presence for the matter regarding the search for a fuma[1] for Princess Yongshou.” And so, with a quick utterance, the nagging hen has been chased away.

Then I exchange some more small talk with him. Sensing that the timing was good, I stand up and hold my fists together. “My brother, Your Majesty, you must have matters to deal with, so I shall take my leave if it pleases you.”
He eyes me for a moment. “Fine. Be sure to rest and recover your qi after you fetch them. You shall come again at a later date so the two of us can catch up.”
I let myself relax and turn to leave.
“Halt.” He stops me before I even get to the door. My stomach tightens. Could it be that I didn’t say farewell properly and now my cover is blown? I turn back, and he’s looking at me. Butterflies in my stomach. He lets out a scoff. “I’ll let you off the hook this time, but I’ll get you back for making me, the empress and all my consorts eat plain congee for three days!”
Holy shit! That’s it?! I almost crapped my pants!
I chuckle. “I’ll be sure to fix something delicious for you, and we’ll drink!”
Leaving the palace, I’m feeling pretty damn good. I didn’t think the emperor would be that easily dealt with. The palanquin bearers are quick on their feet. The litter wobbles along the eastern wind all the way to death row.
[1] The husband of a princess. 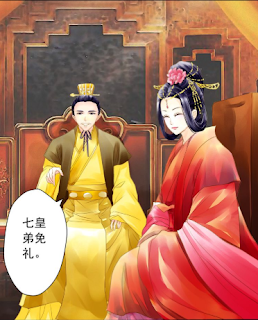