I get out of the palanquin outside the prison complex. Since the guards received special orders from the emperor, they are already lined up in neat formation waiting for me. The head guard shows us the way while Xiao-Shun walks in front clearing the way.
As soon as my feet touch the limestone, I’m hit hard by rank air. Humanoid lumps are shifting around eerily beyond the metal bars. The guard smiles apologetically. “The conditions within are naturally unfit for Your Seventh Highness. This lowly servant already arranged them in a proper room. Right this way, please.”
He leads me and into a small compartment. The room is lit by a pathetic-looking oil lamp. A handful of men are guarding two people, one of whom is sitting on a chair, the other on the floor.
The one on the chair I immediately recognize as Pei Ruoshui. He doesn’t seem to have suffered much in prison. His hair is tidy, and his blue robe is practically brand new. There’s even a tea bowl on the table. Seeing him makes me uneasy, but thankfully he shuffles obediently to a spot behind me after performing greeting rituals all without making a sound.
The brother on the floor is facing the wall as though oblivious to my entrance. Needless to say, it’s the heroic tanhua who strangled the prince. If I remember correctly, his name is Wang Rui. I’ve wanted to witness the glory that is Hero Wang ever since I returned from the Bridge of Hopelessness. But the truth of the matter is that I would be unable to say if he looks more like a human or a bear, even if he were not greeting me with the back of his head. His whole getup would allow him to blend right into the Beggars’ Sect, with hair like a bird’s nest and a head like a chicken coop.
“My Prince,” reminds Xiao-Shun quietly. “Let us leave.” I wave a hand, and he hollers, “Hark! Deliver the Prince and Master Pei to the palanquin. Bring that one along, too.”
Death row service is nothing if not attentive, and they arrange two more litters for us. All three arrive at the prince’s manor safe and sound.
And that’s where the trouble begins. Master Pei returns to his quarters to rest, while a throng of servants gathers at the main hall to receive orders from me, the prince, as to what to do with the Wang fellow. After some consideration, I give my command.
“Find a courtyard for Master Wang to settle in, as well. Get him changed first, and we shall pay him a visit later.”
I’m just wiping my mouth after eating congee and mountain jelly when Xiao-Shun skips over gleefully and murmurs in my ear, “My Prince, that fellow’s been cleaned up from head to toe. He’s in the side chamber in the south courtyard. Would Your Highness like to go over now?”
And since I’m dying to meet the mysterious man himself, I nod without much thought. Xiao-Shun leads me down walkways, past a few moon gates and into a secluded courtyard. He pushes open the doors for me but stays outside. “My Prince, I’ve made it known to everyone in the manor that no one is to approach today. I will now take my leave.”
Without ever taking his hands off the doors, he pulls them closed and hightails it out of there.
I shuffle into the room. There is a small living area, at the end of which is a screen. Beyond the screen are heavy curtains. I pull them apart and duck my head in only to be faced with a grand bed – on which lies a man glaring at me with venomous eyes.
“Chai, you scum! Kill me now!” 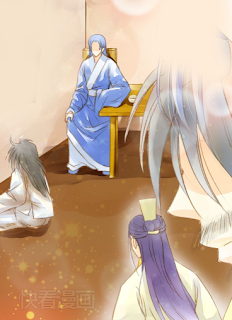