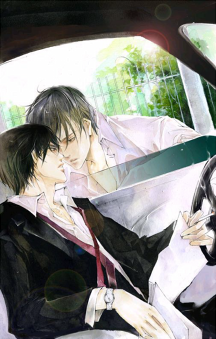 After I was so humiliated at the hospital, I was discharged the next day and went back home. The couple already knew of my great achievement in fainting twice in one night, so I continued to suffer Xie Yan’s ridicule and hostility.
Shu Nian was a kind man with a deep commitment to tending the sick. However, he really made me want to bury my head in the toilet when he grabbed Ke Luo and asked him, “What the heck did you do to my brother?" And Xie Yan, who practically forgot his past pains once his wound had healed, had forgotten how badly I had beaten him up before. So with no fear of death, he gloated over my misfortune.
I was miserable the entire day, especially because Ke Luo was also present.
I had no idea what was wrong with me. In the past, I was like a bee drawn to nectar whenever I saw Ke Luo. I had to approach him and bite him no matter what. And ever since I had woken up in the hospital once more, I didn’t have the nerve to look him in the eye. When I sensed his presence, my limbs stiffened. I acted like I was mentally retarded and smiled as if half my face was paralyzed.
This was probably what a minor actor felt like when he was suddenly hit by the limelight after playing supporting roles all his life. Since I was so accustomed to playing a minor role, I had no idea how a lead was supposed to perform.
After eating dinner, Ke Luo still hadn’t left for the hotel. Instead, he watched TV with us.
Xiao Jia had long gone to bed like a good kid. Four grown men were like kindergartners sitting in a row watching a prime-time drama. Ke Luo sat beside me this time. In the past, if he leaned that close to me, I’d try to take advantage of what I could and lick his ice cream from top to bottom with my gaze.
But tonight, for some reason, I just stared fixedly at the TV screen and kept leaning closer to Shu Nian, making Xie Yan glare at me.
After the drama ended, Shu Nian, who sighed from being emotionally moved, stood up and said, “I’m going to make some snacks.” He then looked at us and said, “Tonight I’ll be making enough for four people, right, Ke Luo?”
“Pfft!” I sprayed a mouthful of sake into the far distance.
Ke Luo shyly gave out a sound of acknowledgment. Xie Yan snickered and said, “Ke Luo, Lee’s body is pretty frail these days. Don’t be too intense later on or he’ll really suffer a stroke.”
I instantly froze and actually lost the strength to counterattack.
------ ❤ ------
After we finished the snacks and washed up, there was nothing else to do except sleep. Xie Yan wrapped his arm around Shu Nian and shot me an evil smirk before entering their room, giving me the urge to really beat him up.
I stiffened for a moment before saying to Ke Luo, “Come in.”
Once the words came out of my mouth, I felt steam rising from my head. I practically felt like we were newlyweds.
Ke Luo was a bit shy as well. When he followed me into the bedroom and watched me slam the door shut, he felt a little nervous. His slightly reddened cheeks made me also blush with a racing heart.
I had intended to take the initiative and attack, making a roaring comeback, but bashful Ke Luo actually approached me first. He lowered his head and kissed me.
His move triggered the savage in me. I instantly threw today’s caution and restraint to the wind and immediately pounced on him, crashing against him to the point of his teeth clattering.
We were indisputably already familiar with each other’s body, but to have proper sex by mutual consent was a first. It seemed like both of us had become stupid and nervous with our palms sweaty. It took a long while before I managed to unbuttoned my shirt. I even tore off a button.
While he was lifting his arms to take off his T-shirt, I threw him onto the bed like a predator.

Ke Luo, with his head still inside his T-shirt, laughed and struggled a couple times as I teased him. That made him all the more captivating. I trailed kisses little by little down his neck, repeatedly nibbling and biting the two dots on his chest as if I was going to devour the young beauty who was momentarily unable to fight back.
When he pulled off the T-shirt that had bound his hands, I could see his flushed face clearly.
Restraining the impulse to spurt out blood from my nose, I straddled his waist and tore off his slim pants. “Let me top you!”
“Huh?”
I kissed and caressed him. Going all out with everything I had, I attempted to seduce him. “If you truly love me more than Shu Nian, then let me top you once.”
Ke Luo, pressed down by me, blushed as he said with bewilderment, “Ah…do you have to make that correlation…”
I worked hard kissing his neck, causing his breath to quicken. “Of course! You should make me feel that I’m different from him. Only then can you prove that you’re not taking me as a substitute.”
“I never took you…oh…”
Before his words of defense came out, he was ruggedly kissed by me.
When our lips separated, I used the predatory gaze that had captured countless beautiful young men to entice him. “How ‘bout it? Have you really fallen for me? Do you prefer having me than Shu Nian?”
Ke Luo’s entire face reddened as I rubbed myself against him, who was half-naked. After a moment, he nodded.
I immediately burst with joy.
As a matter of fact, I still didn’t know when he had fallen for me or why he liked me. The surprise came so fast that I didn’t even have the time to properly ask him. What’s more, I had no idea where to start asking either.
But I knew he was honest at heart. He wouldn’t lie. If he actually said that he likes me, then he must like me. Not to mention he’d sacrifice his rear as a testament.
I only needed the ends. The means for getting there really wasn’t important. And how could I just say out loud why I was so infatuated with him.
So long as he loves me and loves me the most, then it’s all good.
I excitedly went to the bedside table to search for the commonly used Durex, but then I realized that I had been in a dry spell for so long that I basically wasn’t prepared for that kind of thing anymore.
Ke Luo said, “Uh…I have some in my wallet…”
“Why do you carry those?”
Ke Luo felt extremely awkward. “…I was just thinking that in case you someday all of a sudden wanted do something to me again, then, uh…”
I furiously said, “You impudent rascal!” And then I went over to fish out his wallet from his clothes, seizing the entire pack of Durex condoms.
After that I spent a period of time equipping myself. What man wouldn’t be excited at this time.
One minute…
Two minutes…
After Ke Luo lay there waiting for a while, he couldn’t refrain from asking with curiosity, “What’s the matter?”
My face stiffened a little.
Ke Luo sat up and gave one look below my waist. “Ah, is the condom too loose?”
“…”
Ke Luo smiled. “It’s a size issue then. In fact last time, when I used yours, it really dug into me…”
I really wanted to throttle him.
“What’s that supposed to mean? Would mine be any smaller than yours?!”
“I didn’t say that,” Ke Luo smilingly said. “But maybe my expansion surpasses yours?”

I yelled in outrage, “I’m not doing it anymore!”
And then I turned over and dropped onto the bed, feeling resentful.
Ke Luo approached me from behind. I could smell that fresh, warm, alluring scent of his.
“You really don’t want to?” He asked as he slowly trailed kisses down my back.
I sighed internally. The skills of young people are as outstanding as ever, but I won’t be seduced by it.
Ke Luo kissed for a while and, before I could take no more of it, he sat up. Just as I let out a breath of disappointment, I saw him lean against the head of the bed with the sheets draped over him from his hip bone down—his contours exceptionally beautiful. After that, with a smile so innocent and pure, he grabbed my hand and placed it at the edge of his mouth. First, he kissed it, and then he sucked one of my fingers.
Blood instantly rushed to my head, and I immediately howled as I pounced on him like a wolf.
Ke Luo laughed as he embraced me, then flipped around and said, “Xie Yan was right. You really do like me like this.”
I was already itching to do it, and well, it wasn’t the first time I’d been pinned down anyway. So for now I’ll abandon the top-bottom matter. As I moved my hands up and down his body with burning lust, I said, “Next time I want to be the top!”
Ke Luo laughed and said, “Okay, mention it again when you can use my condom.”
While I caressed him, I angrily said, “Men don’t rely on size. We rely on technique!”
Ke Luo smilingly gave a sound of acknowledgment and blocked my mouth.

While I unleashed the wolf in me, I thought, Ke Luo still hasn’t tasted that side of my technique. Once I attempt it, he might not be able to stop himself, submitting under my body and groveling beneath my suit pants.
Fine then. I’ll just keep it in reserve as my ultimate weapon.
I believe I should still be able to do it before I’m sixty, no, seventy. So no hurry. I’ll just conceal my strength and bide my time for now. When that major crucial moment comes, it won’t be too late for me to show my hand and blow his mind away.
But, alas, who knows when that crucial moment will come…