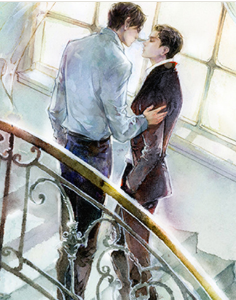 Excerpt from Young Master Xie Yan's uncovered diary
x month x day - cloudy
Ke Luo actually said that he couldn't find the scumbag who had kidnapped Xiao Nian. Who was he trying to kid? Whoever the Lu household wants to find, even if it's a mouse, can be dug out from three feet under. So I heavily suspect him of having an affair with the scumbag!
Yet Xiao Nian insisted that I stop looking into it because he thinks the scumbag isn't just any scumbag. Sigh, in any case, my Xiao Nian is just too soft-hearted. Since he thinks he'll feel better if it’s like that, I won't look into it then.
But, as for Ke Luo, I still can't help but say one thing: he must be having an affair with that scumbag! √
(The sentence was checkmarked with a red pen by Ke Luo; "scumbag" was crossed out with a red pen.)

x month x day - a bolt out of the blue
It really hit me right in the face. The man who donated his bone marrow to Xiao Nian was actually the scumbag who had kidnapped him! Why do I feel like something's not quite right? Speaking of which, the man resembles my Xiao Nian a tiny bit. Although his personality *&%&% (A section was blacked out with a marker by Lee), but maybe...quite possibly... At any rate I had Ke Luo go help investigate it. He's having an affair with the man anyway. Don't ask me for proof. This is my God-given intuition!

x month x day - clear sky
Today Xiao Nian's brother came to stay at our house. The two brothers really do look quite alike. But of course our Xiao Nian is more charming, adorable, and considerate. And his brother, apart from that face, everything else is just *&%&% (The remaining section was blacked out with a marker by Lee)

x month x day - rainy
Today Ke Luo called again. For a tiny, short while, I overheard them just talking about some trivial bullshit, like how much a bag of vegetables costs, and then they started talking about Xiao Nian's brother. The phone call lasted for a total of thirty-seven minutes and forty-nine seconds, but I’m not jealous of Ke Luo now. The reason? Of course it's because I'm a broadminded, mature, good man. (Ke Luo wrote an X with a red pen)

x month x day - I forgot what the weather was like
Today we went to a hot spring. To be honest, I was really in a very bad mood that I would have to let other people see my Xiao Nian half-naked. But I'm a mature, broadminded, good man. What’s more, Xiao Nian's swim trunks are very tightly secured, so oh well!
Then I ribbed Ke Luo saying, "Lee’s coming out any second now. Knowing his personality, he might be so unrestrained that he won't be wearing anything."
And then Ke Luo's little Luo ‘whooshed’ up at once.
Wahaha, Xiao Nian personally saw his shameful side. From here on out, he will never be charmed by him. A weak-minded man is so tragic.
I have a much stronger mind. I waited until the two were done soaking in the hot spring and had gone to the changing room before I pushed Xiao Nian to the edge of the pool, and then I *%&% (The middle part was entirely blacked out with a marker by Shu Nian.) What a wonderful day it was!
-------------------------------------------------------------------
Dairytea: Hello! It's been a while~ Is anyone still following LL? XD ;;; I hope you guys enjoy reading this extra. There are more extra chapters to come. Although it may take a while for me to work on it, I'll eventually finish translating it all. (Lee, I haven't forgotten you!)
In case you'd like to re-read the chapters that correspond with the diary entries:
Diary entry 1: chapter 11
Diary entry 2: chapter 13
Diary entry 3: chapter 15
Diary entry 4: chapter 15
Diary entry 5: chapter 20