The imperial intelligence agency sure is powerful. The first thing the emperor greets me with is, “We heard you had an assassin in your manor? How is your hand, anything severe?”
I answer politely that I’m fine while he picks up a lump of something from the table, shakes it out and sighs. It turns out to be a strip of white cloth with messy, red writing on it. The emperor asks with a cocked brow, “Do you know what this is?”
No, pray tell!
He squeezes it and punches the table. “It’s a blood letter[1] written by the imperial father-in-law! The empress’ sister was kidnapped this morning!”
“Oh, really!” I’m so delighted that I forget to be surprised.
“Kidnapped,” he snorts. “What lies! Does he think we are stupid?! Evidently she eloped with some manservant! Kidnapped?”
I rub my nose. I didn’t take the imperial sister to be such a brave woman. Sixteen years old and already eloping. Wow, the heavens are smiling down on me.
“You’re happy?” I can hear his teeth grinding. “Well we are stressed! The imperial brother-in-law came this morning with his father’s blood letter requesting our edict to exterminate his entire clan. The empress knelt before Qianqing Palace asking for an annulment of marriage. Why, does it look like we are a tyrant?!”
I’m here still taking in the wonderful news that she ran away.
The emperor continues his rant. “The prince’s bride elopes with a manservant before the edict of marriage has been released – where has the dignity of our house gone! Even if we were to forgive them, the empress dowager would not. In that case, we shall do as they ask. The empress shall be declassed as a civilian, and the Zhou house exterminated!”
I shiver. “My dear brother, Your Majesty, you can do no such thing!” For heaven’s sake, it’s partly my fault that she eloped in the first place. If this gets out of hand, it’s no joke. “The empress is after all the mother of the nation. You can’t just annul the marriage like that. Needless to say, the imperial sister running off isn’t the fault of her mom and dad. My brother, you must be calm.”
“Calm?” His other brow cocks up. “You’re asking us to be calm! If you hadn’t gone to see that moronic spectacle, none of this would have happened! Apparently the imperial sister’s lover was waiting below the tower for the silk ball, and it was Prince Tai who elbowed him aside!”
I dab my forehead.
“Now we are stuck in this mess with nowhere to go. All below heaven knows that you, Prince Tai, caught the imperial sister’s silk ball. The empress dowager will return the day after tomorrow from her pilgrimage to Long’an Temple. Where is our dignity as the royal family?! What do we say to the empress dowager?! There’s nothing we can do other than do over the empress and the Zhou house!”
I dab my forehead again. “Nothing…nothing can save the situation?”
He laughs wryly. “You have something?!”
“Well, well.” I dab my forehead once more. “There might be something, but I dunno…”
His eyes glimmer, and he hisses out between his teeth, “Speak!”
I clear my throat. “The situation now is all caused by the elopement of the imperial sister. As long as she doesn’t elope, then our dignity is saved. If the imperial father can tolerate all else, then the problem is easily solved.”The emperor sits down on his throne. “Continue.”
I look up at him. “No need to chase after her. Let her live with her lover. Imperial Sister-in-Law is but a title. As long as the imperial father-in-law announces that she died due to sudden ailments, the problem is no more.”
“What you’re saying is,” he confirms while stroking his moustache, “ask the imperial father not to publicize this fiasco and simply fool the people and the empress dowager into believing in her sudden death. If so, the problems will solve themselves!”
“Your Majesty’s wisdom knows no bounds!” I flatter with a smile. Damn, I sound just like those eunuchs in the historical dramas!
The emperor nods accordingly. “Very well, it is a plan.” But my victory won’t come that easily. “However, it is not detailed enough.”
Not detailed enough? He rubs his moustache watching me and suddenly smirks. “The imperial father-in-law has worked tirelessly for the country and the people until his old age. The Zhou house is also the empress’ natal home, so we must grant them the appropriate honours.”
I chuckle nervously. “Well, Brother, why don’t you figure all that out yourself. And if you will excuse me…”
“Rush not.” White teeth flash from beneath his moustache. “My grants won’t work without you, so listen well to my words. Regardless, the imperial sister will be your princess. Dead or alive, you shall take her hand in marriage!”
[1] A blood letter is written by biting the skin on one’s index finger and writing with the blood to show the sincerity of the message. 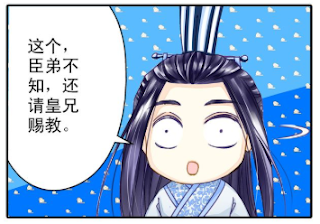