The report stuns me. Why does his dad dying make him want to chop me up?
I rush to the inner courtyard in long strides, meeting Master Su along the walkways. He tells me that the tanhua has been subdued. When the tanhua was wrecking havoc in the inner courtyard, he ran into Liu-shen, Zhong-shu’s wife, who had a broomstick in hand. Applying a Yaksa Exploring the Sea and a Tailwind Tiger Strike, she knocked him out cold on the ground and hauled him to the southern courtyard. Master Su just checked on him, and the doctor said he would wake up tonight.
I have to admit I’m a little disappointed that I wasn’t able to witness the heroic figure of Wang-tanhua slashing at enemies. Meanwhile, Master Pei is saying nonchalantly, “Perhaps it’d be best to hire a Taoist priest to alter your luck, Milord, since recently there has been much blades and bloodshed.”
Zhong-shu brings me the tanhua’s weapon with the help of a few servants. It’s a sword that Prince Ren apparently gave me as a gift, and it even has a name, Chenqing. Made from top-quality steel, it weighs at least five kilograms. I had used it as a dumbbell to work on them biceps, and later Hua Yingxiong carried it around as a toy and dumped it in Zhuangzhi Pavilion. Who knew those chicken-leg arms would be able to hack around with such a sword? I guess the morning exercise was truly very effective.
Zhong-shu now takes me to inspect the scene of the crime. The only loss is the sandbag in Zhuangzhi Pavilion because the tanhua cut a few holes in it and half of its contents has spilled out.
And then Master Su explains in detail why Wang-tanhua wants to chop me up. Oh dear heavens, I swear it wasn’t my fault.
So, the story goes that the empress dowager captured the Wang house, removing them from their ancestral home in Shandong and placing them under house arrest in a residence in the capital’s countryside. It might have been house arrest, but the royal family is known to be generous plus I specifically asked for special favours. So life wasn’t all that bad.
Wang Rui comes from a considerably cultured and scholarly family, but for more than two generations they’ve been dirt poor. The tanhua’s dad was infamous for his miserly lifestyle. So when a digestive system used to green leaves and radish skins gets flooded with riches of the land and sea, it’s no wonder his blood sugar and cholesterol all skyrocketed.
The servants and guards stationed there had all been treated handsomely by me so that they would treat the Wangs extra well. They would even form groups of four with the old man to play mahjong.
And so, disaster struck today. This afternoon, senior drank two tubs of wine and ate rice-coated pork before sitting down for a match while discussing historical figures. He got to the part where the Hegemon-King[1] slit his own throat, and sighing in lament, he played a wrong tile – the three bamboo. The frustration got to his heart, and he toppled over. Dead on the spot.
The servants in the residence came first to the manor to report the passing just as Wang-tanhua and Hua Yingxiong were spending some time in Zhuangzhi Pavilion playing with the sword. Upon hearing the news, Wang-tanhua first fainted. When he regained consciousness, he reached the conclusion that, since his father was arrested by the empress dowager, she was the mastermind and I was her assistant. That’s why he wanted to chop me up with Chenqing. That’s how the story goes.
Hands behind my back, I pace in circles. If his mind is stuck in this moronic logic, I doubt I’ll easily convince him otherwise. And that spells an infinite amount of trouble in the future. I have to get rid of him somehow.
A bird perched on the roof ridge of the adjacent building takes a breath and flaps its way into the air again. I wet my mouth with a sip of tea. I got a plan, but I lack a pair of helping hands.
A pair of hands highly skilled in martial arts.
The first person that comes to mind is Prince Ren. I immediately set out by palanquin to Prince Ren’s manor. Alas, man cannot predict what the heavens have in plan. The prince’s beloved cock has died. Dabbing at her eyes, one of his concubines says to me, “Prince Tai, you came at a good time. Please speak with my lord. He hasn’t drunk a single drop of water since returning from the palace... It’s but a chicken...!”
The chopstick in Prince Ren’s hand snaps in half. “If I ever hear the words ‘General Xiangying is but a chicken’ uttered again, you will be joining him!”
Then, with raw eyes, he returns to digging a grave for General Xiangying in the main courtyard.
I heave a long sigh and leave.
At the front of the manor, I dismiss the waiting palanquin with a wave and take a few laps around the block. I visit a little restaurant and down a few drinks before making up my mind. Stepping out of the establishment, I signal the undercover servants nearby. “Bring the palanquin here and take me to Anguo manor.”
Fu Qingshu clearly thought I would never dare visit him after all that, and his expression is all but terrible. Beggars can’t be choosers. I put on a soft, pleasing tone. “In all honesty, there is a favour I must ask of you. I hope you will accept.”

[1] Xiang Yu (232-202 BCE), a warlord who ruled a large portion of China after the collapse of Qin and an enemy of Liu Bang, the founder of Han. He held the famous Hongmen Banquet where he invited Liu Bang in an attempt to kill him. 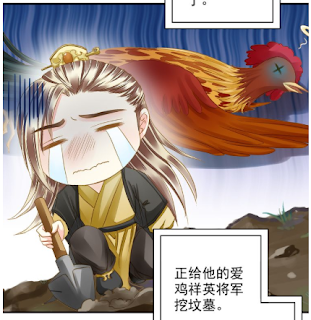