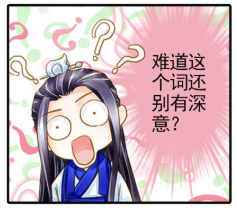 I recall Pei Ruoshui asking me if I was letting them exit the manor… Could it be that this has some deeper meaning that I don’t know of?