What the hell!
Standing in the inner courtyard’s walkway, I see before me a grim scene, a nation collapsed! How did this happen!!
One jumped in the lake, three jumped in wells, six hanged themselves, two cut their own throats, four took poison, and one headbutted a wall. Other than Hua Yingxiong and Su Yanzhi, all seventeen tried to do themselves in.
Heavens above, I really didn’t do anything! I yell to the sky, WHY! WHY HAS THIS HAPPENED!
WHYYY?
On the shores of Lake Wangxing, I perform CPR on Master Pei. When he opens his eyes, he grasps my arms, face full of grief. “I, Pei Qixuan, have lived a filthy life and wish to die clean but, alas, am not able. Your Highness, I beg for your grace to permit my end.”
Fucking hell! He obviously planned this with the three well-jumpers! Their lines are exactly the same!
I give CPR to the eleventh master, Liuyun, after untying the belt that he hanged himself with. He opens his eyes and pulls my sleeve, desperate and sorrowful. “Why did you bother saving me, Milord?” Yeah, cliché but normal. “My Prince, please allow me a clean end lest I cause trouble for Your Highness.” Pretty much the same as the other five hangers.
Out of the four poison-takers, I manage to get three back by flushing them with soap bean water. That leaves the fourth master, Yueqing. Zhong-shu’s wife, Liu-shen,[1] is apparently an expert in stomach pumping concealed among the commoners. She rolls up her sleeves and pries open Yueqing’s mouth. After pouring in another two bowls of soap bean water, she brandishes her iron fists and begins pounding on his stomach. Meanwhile, I’m just on the sidelines enjoying the show. According to Xiao-Shun’s introduction, Liu-shen’s daughter-in-law, Cui-niang,[2] is an addict. She has a tub of Poisonfeather wine and takes a swig whenever she gets upset. And so, Liu-shen has developed an excellent skill through their familial interactions. She’s even reportedly able to bring back victims of blister beetle poison.
Yueqing’s bluish face has now turned waxen from the beating, and out from his opened mouth comes a gush of white foam. Liu-shen rolls down her sleeves, and two servants help Yueqing up and give him a bit of clean water. His eyes barely slide open. I step forward, ready for what’s to come. And sure enough, Yueqing looks around him with despair. “Not even the heavens want me.” I start to count from one. He looks at me. “My Prince, I beg you…” Before he can finish the next syllable, I reach number three. His eyes roll back, and he loses consciousness again.
The two throat-cutters have been bandaged at the neck and cannot talk at the moment. They simply glance at me then at the ceiling while two tears streak down their face. Lastly, I check out the wall-rammer.
It turns out to be none other than Master Chenfeng who asked the question earlier this morning. The nineteenth master was the latest addition to the lineup and chose the bloodiest method. His forehead has been smashed open, leaving a ghastly red wound. My first words to the doctor: “Will there be a scar?” You know, there’s only so much I can do.
The capable live-in doctor keeps a two-stranded goatee that gives him an otherworldly aura. “Rest assured. You must have forgotten, Your Highness, that when Master Su sliced up his own face, this old doctor was able to nurse it back to normal.”
Who would have known? There are such crouching tigers and hidden dragons in the prince’s manor.
Master Chenfeng is pulling a Xu-Huang-reading-books-in-the-tent on me,[3] eyes closed lying in bed. I’m still hoping to get a word or two from him. I pull up a chair and earnestly ask him why.
He stays silent, his eyelids barely moving. I sigh and let it go for now. I tuck in his blanket and pour out a cup of water on the bedside table. Just as I turn to leave, he starts, “My Prince.” I turn back around. His eyes are still shut. “Why do you bother keeping me alive? Grant me a quick death and leave less trouble for yourself. Isn’t that a tidy end?”
The hell with this repeated bullshit!<
Can someone please tell me! What’s with these people?!
I grab the nearest servant and demand the whereabouts of Su Yanzhi. The servant tells me that Master Su is in the west courtyard talking sense into the eighth and fifteenth masters who also cut their own throats.
I rush to the west courtyard, drag Su Yanzhi to an empty room and bolt the door. From the bottom of my heart I just want to find out the reason why.
Su Yanzhi responds with another question, “Young master, are you afraid of death?”
[1] ‘Shen’ is a general suffix for women older than the speaker and is also the honourific for one’s father’s younger brother’s wife.
[2] ‘Niang’ is a general suffix for young women.
[3] A reference to Xu Huang, a character in The Romance of Three Kingdoms, who was reading military books when the enemy general came to his tent to persuade him to surrender, essentially ignoring him. 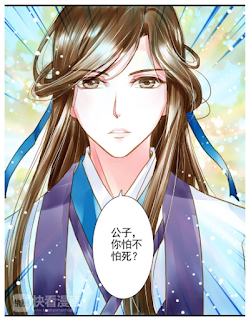 "Young master, are you afraid of death?"