Introducing Spring Once More, written by the author of 'The Peach Blossom Debt'!

Chapter One: A Routine Self-Introduction - A Man Like Me

Dairytea: Picture from the manhua!!! 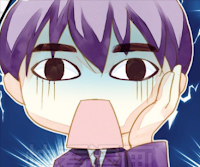 Spring Once More by ayszhang is licensed under a Creative Commons Attribution-NonCommercial-NoDerivatives 4.0 International License.
작성자: Dairytea 시간: 8:20 AM