Turning the Corner to Love You ch2 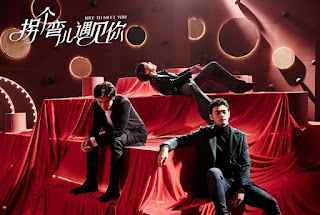 Turning the Corner to Love You chapter 2
(Reminder: To read the translator's notes, hover your cursor over the text in red/light blue.)

Emma, a supervisor at Shen Hai Agency, was having a meeting in the conference room.

She wore a refined business suit paired with stilettos. Her voice was clear and powerful, revealing the strong and elegant sense of a woman in her thirties.

“The preparations for FIT’s graduation show have already began. I want a list of selected models from the model group over here on my desk before the day’s over. As for the entertainers, organize the resumes of the top three and give them to Allen.”

Whispers could be heard from below the stage. Everyone’s faces revealed their eagerness.

“FIT and Shen Hai have been collaborating for ten years. You should all know the importance of this event. Don’t send me anyone who might cause problems.”

After Emma finished speaking, she swept a keen eye across each person present before lingering for a few seconds on Chang’A, who was standing in the corner. Then, she walked out with long strides.

The room immediately exploded with noise.

“FIT’s super amazing! It’s just a school graduation show, but they’re treating it like one of the premier events of the art world,” Si Mei, a new model agent, exclaimed.

“Then I guess you didn’t know that every year the best FIT graduate gets to hold a solo exhibition overseas. When they come back, they will definitely be a popular artist, and have a meteoric rise in their careers!” the veteran Ah Ken bragged exaggeratedly.

“Really? Then isn’t our company really amazing since we are FIT’s official partner! I’m super lucky to be able to enter Shen Hai!”

Off to the side, goosebumps rose along Chang’A’s body as she overheard Si Mei’s words. She could not help but ridicule her in her mind, Are you Taiwanese? Acting so cutesy!

“But the fashion design department hasn’t been overseas for quite a few years right? Recently the illustration department is more popular,” Mark, a member of the senior staff, commented.

“They haven’t been since I entered the company, but apparently FIT’s fashion department has always been the best,” Gary replied, eager for gossip.

“Oh right! I know Cheng ZhongYi, the graduate who went overseas in ’09! I’m a big fan of his! He’s good looking and even received a Best Newcomer in Photography award in England the day before yesterday!” Si Mei gushed, her big breasts bouncing slightly as she waved her arms around excitedly. Ah Ken who was watching almost got a nosebleed.

“Cheng ZhongYi? Isn’t he a movie director? Our Wei Qing was the male lead in his graduation short film.” Mark looked puzzled as he asked.

“He’s a genius, so of course he’ll know a bit of everything!” Shi Mei’s face was blushing as she emitted the aura of a number one fan.

The lively noise of gossip followed the crowd as they left the room.

Chang’A relaxed her posture and gathered up the documents with a frown. “It’s FIT’s show again. Everyone else is so busy, but I’m always stuck with nothing to do… Ahh…”

She started to complain, her slightly chubby arms sprawling out over the desk top.

“Is your Great God Chi still refusing to go to FIT’s show?” On one side of the room, Allen was gathering up his stuff while sneering at her.

“Chi Yue has such a big reputation, he’s able to do anything he wants without caring about others. Even Emma can’t control him, so you should just relax,” Gary also sneered at her while packing up the documents on the table before standing up to head out.

“Man, your life sure is good. We have to rush about every day, but you just have to take care of Chi Yue. It’s not a bad job at all,” Allen teased as he left the room alongside Gary.

Chang’A cursed them in her mind, If you envy me so much then why don’t you split half of your bonuses with me!

She sent a text message to Chi Yue at the same time.

The screen showed the pair’s conversation.

At that time, Chi Yue was currently shooting for a high-end fashion brand in Shen Hai’s photography studio.

A six-foot-one man stood under the strobe on legs that were long, slender and straight. He had an impressive appearance and was comfortably wearing an exquisitely tailored outfit. Occasionally, he would gaze sharply into the camera. All of his actions were skillful and proficient.

The photographer was Ye Qi who was said to be famous within the industry for being picky and hard to please. Yet at this moment, he was happily pressing the shutter. The photos on the display screen were all of exceptional quality.

The shoot, which was supposed to end at five-thirty, was wrapped up at four. The efficiency of the combination of a supermodel and a first-class photographer was incomparable.

As Chang’A walked in carrying water, Chi Yue was already checking the photos with Ye Qi.

The photos on the screen were constantly switching. Ye Qi had a face full of praise and was so excited that he even danced for joy like a child.

Chi Yue wore a polite smile and pointed towards one of the suits that had been worn today. “This top actually really fits this bottom. The colour of the socks just needs to be a bit brighter, and the whole outfit will have a very different feel.”

Ye Qi was a little flabbergasted. “Even though you’re a model, you have such a keen sense of fashion. Did you study it before?”

Chi Yue smiled and intentionally avoided the question. “Actually, I am also very interested in photography.”

“Don’t do it, don’t do it. For someone as talented as you, you would definitely steal my source of income,” Ye Qi said while deliberately acting scared.

“Hey, isn’t that Sir Ye supposed to be very picky and hard to get along with?” Si Mei, who was new, and thus currently observing, stuck out her tongue cheekily. “Why does he seem so cute?”

Gary glanced at Chi Yue. Who knew how many jobs were snatched away by Chi Yue this month. What’s so good about him? He only had slightly longer legs, a slightly more outstanding temperament, and was slightly more handsome. However, he did not get along at all with others and was always picking at and criticizing the clients.

Ah Ken’s attitude was a little better. “I say, it seems that even Chi Yue’s poker face cracks once in a while. Even though they’re both notoriously hard to get along with, aren’t they actually exceptionally harmonious together?”

Chang’A who was listening quietly at the side could not help but curse in her head. Poker face? Haha. If only you’d seen him being stupid.

Ah Ken saw that no one replied to him and poked Si Mei with his elbow. “Hey, don’t you think that those two look like a couple within the fashion circle?”

Ever since stepping into the studio, Si Mei’s eyes had never left Chi Yue. This tall and handsome man was like a walking pheromone, just her type. She could not help but turn around with an astonished face after hearing Ah Ken’s words. “What are you saying?! How can a man like Chi Yue be gay!”

While everyone was chattering away, Chi Yue and Ye Qi had already finished their work and were exchanging farewells.

The two of them kept going back and forth, seeming as though they did not want to part.

Si Mei thought about Ah Ken’s jokes and could not help but shiver.

Not good. She needed to grab onto this kind of quality man promptly. With a determined look, she daintily and gracefully walked over in her heels.

Chi Yue had just taken off his jacket and handed it to the assistant photographer. As he lifted his jaw and loosened a few of the topmost shirt buttons, a pair of flawless legs came into his field of vision. A short skin-tight dress, a slim waist, an ample bosom, and a blushing face that straight males loved followed.

Si Mei slightly lowered her head, acting a little shy. “I am Si Mei, a new model agent. You can also call me Xiao-Mei. The seniors brought me here to observe. I really learnt a lot. Yue… You’re amazing…”

Chi Yue looked behind Si Mei at the so-called seniors. Ah Ken’s face was green, while Gary rolled his eyes.

Chang’A stood beside them, looking like she had her head in the clouds.

Chi Yue’s mouth twitched. He walked past Si Mei, headed towards Chang’A and took the water from her hands.

Phst, the sound of the bottle being opened rang out.

Chang’A raised her head and stared blankly at Chi Yue’s perfect jaw line. His Adam’s apple moved. His shirt collar was loosened, and within, a beautiful collarbone could be partially seen.

She was currently not in the mood to appreciate Chi Yue’s perfect figure but was immersed in the sorrow of not being able to get the bonus from participating in FIT’s show.

Chi Yue finished drinking and wiped his mouth before throwing the bottle back to Chang’A. Looking at her disheartened expression, he could not help but want to tease her a little.

He bent down and lifted Chang’A’s round face. “Why do you look terrible? Did you not eat enough?”

A powerful and low voice.

Chang’A sniffled. Like the professional agent she was, she still urged him even as she wore an accusing face, “Chi Yue, are you really not going to FIT’s show? Everyone is fighting to the death for a chance to go.”

Chi Yue raised an eyebrow. “So what? Do you want me to die?”

Chang’A frowned worriedly. “That’s not what I mean… I…”

After that, he unrestrainedly left while taking big strides.

Si Mei stood awkwardly in her original position. She could not believe it. Had she just been ignored?

When the assistant photographer came out from the dressing room and spotted Chang’A, he happily patted her shoulders. “Da-Chang, you finally came. Let me tell you, this guy is too good. You guys have so many models, but only Chi Yue can express emotions. Even the casually taken photos were of such high quality. He’s definitely supermodel material!”

Chang’A’s face went dark. “How many times have I told you to stop calling me Large Intestines!”

Email ThisBlogThis!Share to TwitterShare to FacebookShare to Pinterest
라벨: Author: Mao Ye, Novel: Turning the Corner to Love You