Master Su touches his forehead more and more frequently now, and I can’t help but complain to the captain.
“Why does it take this long to cross a river?”
The geezer replies, “From Zhengxing Wharf to Fengyang Wharf, you hafta travel twenty, thirty li due east, not to mention crossin’ the river itself.”
That leaves me puzzled. “We just need to cross. Who said anything about Fengyang?”
The boatman squints as he rests his oar. “Sir, you haven’t crossed here before, have you? Straight across the water is a dirt hill and wild lands. Where ‘ud your party rest?”
I accept the lesson with humility and turn to watch Master Su’s silent suffering.
Finally, we make it to the light at the end of the tunnel – a small section of wooden planks. That’s the so-called wharf. The other raft lands as well, and the two boatmen follow us onto the wharf shortly after laying down their oars. Li’l Marquess digs out some loose silver, but the geezers wave it off, grinning.
“Them mules and the big cart’s enough for us.”
With that, they pushed off the wharf with a bright holler.
Holding Master Su up, I scan our surroundings. “I suppose the good people of Fengyang are watching the race.”
Behind us is the mother river, and before us is a flat, yellow dirt road. Not a soul in sight. I scratch my nose. “Looks like we just have to go by foot.”
Cooling himself with a fan, Li’l Marquess glances at the position of the sun. “But look at that fork in the road. Which way do we go?”
I look at Xiao-Shun, who looks at Zhong-shu, who looks at Master Su, who looks back at me.
I rub my chin. “Let’s walk over and ask anyone we see. It’s better than staying here and getting baked by the sun.
When we get to the split in the road, we still haven’t seen anyone. Now I’m angry. “Where the hell are the townspeople?! What the hell is duanwu anyways!”
But Xiao-Shun proves to be the sensible one. “Milord, why don’t we take a rest under the yonder trees. Maybe a few will pass by. We can’t blindly choose and risk taking the wrong path.”
I have to agree with him. I help Master Su along and sit on the pieces of luggage cloth that Xiao-Shun lays out.
Seeing his pale lips, I hand Master Su a gourd. He really had a tough time on the raft. He looks ready to collapse now. After he manages a few sips, I take it back. “Now that we’re not on the raft, you can take a short nap on my shoulder. You think you will be fine to walk afterwards?”
I bet he wouldn’t even be sitting up if he weren’t leaning on me, but he’s still trying to appear fine. “It’s nothing. I just need to rest.”
Seeing his stubbornness, I reach around him and pull him closer while using my other hand and sleeve as a fan. Biting the top off the gourd, I take a sip before offering it to him.
“You should drink some more.”
The young marquess, who is sitting beneath another tree, clears his throat. I glance over. He’s fanning his fan leisurely watching the sky. The three servants are staring at the road, frozen like stone. I stretch my legs and make a useless comment to break the silence:
“Fuck! There’s still no sign of anybody!”
Still, nobody makes a sound. I look at the sky, the ground and the road, hoping to find something to talk about, when Xiao-Shun’s head jerks. His glassy eyes come back to life, and he rises slightly pointing at the distance.
“My Prince, isn’t that a carriage coming from the left split?”
I squint in the direction, and damn, I see two handsome horses pulling a carriage. So much cooler than my lame ass mules!
Xiao-Shun cranes his neck. “I dare say there is more than one!”
Flapping my collar, I retort nonchalantly, “So what? We can’t hitch a ride anyways. They’re going the wrong way.”
“Even if we can’t hitch a ride, we can buy one of their vehicles,” Li’l Marquess remarks casually.
Meanwhile, Xiao-Shun is muttering, “What’re they doing here this close to dusk? There’s nobody to ferry them across.”
In the meantime, the first carriage has reached us. The driver jerks the reins and barks out commands to the horses. The vehicle slows and pulls to the side of the road. Xiao-Shun makes to approach, but the driver has already hopped off and stepped towards the trees. Then out of nowhere, he falls to his knees and holds his fists together facing me.
“Young Master, please board.”
I scratch my ear. Did I hear that right? Master Su sits up straight. There are three carriages behind the first one, and they all stop at the side of the road one by one. Their drivers all jump off and kneel down beside the first one. I’m still fanning myself with my collar. What the hell is going on?
As the last vehicle halts, someone comes out from behind the curtain wearing a lake green robe. Seeing him approach, I pinch my thigh. Fuck! I’m not hallucinating! Now Master Su rises to his feet. The newcomer smiles at me, his slender, enigmatic eyes glowing with delight.
“Qixuan, here to escort Milord and Master Fu into town. I beg your pardon for the tardiness.”
I pinch my thigh again before getting up.
“Um, Master Pei... Where the heck did you come from?” 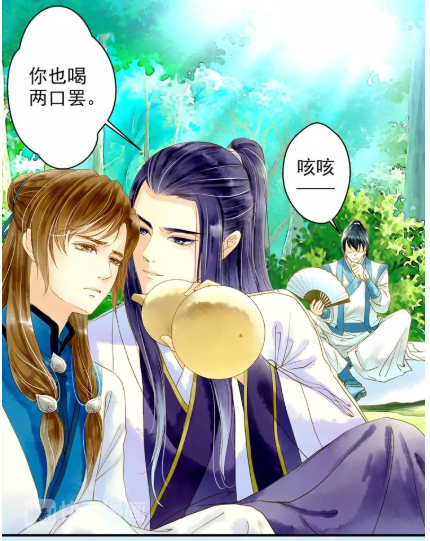 “You should drink some more.”
The young marquess, who is sitting beneath another tree, clears his throat.

He’s fanning his fan leisurely watching the sky. The three servants are staring at the road, frozen like stone.