My second return to the mortal realm was just as noisy as the first. Just as my eyelids quiver and crack open, I hear this squeaky, androgynous voice that just about sends me back to the Bridge of Hopelessness.
“Quickly now! Deliver the news! His Seventh Highness has awoken!”
“Zhang-gonggong.”[1] The melodious tone of a female voice nearly brings tears to my eyes. Finally, a goddamn woman around here! “Do not dare fool us now. Our son…has our son truly awoken?”
I wiggle my fingers and open my eyes to a beautiful woman in courtly attire bounding toward me. “O my son!” she bawls. “You’ve finally awoken. Do you know how worried I was?!”
Oh shit, she’s the prince’s birth mother, the empress dowager herself. I pretend to be weak as I push myself up in bed. “Empress Mother.”
Before I can finish, I find myself drawn into her bosom and rubbed endearingly. “What were you trying to do, scaring me half to death like that?! You must know, I almost left this world along with you… O you hound! But you had some goodness left in you, enough to come back… Your brother, His Majesty, asked me to wait a few days for the yin energy to disperse before I came to see you, but before I could…you went and….”
Geez, do I feel awkward being stroked in her arms. At the end of the day, she’s the prince’s mother, not mine. Judging from her looks, she must have been ‘a real knockout’ in her prime. If she were twenty years younger, I’d run after her even if I lose both my shoes. Being so tightly embraced by such an elegant and charming lady feels really awkward, especially since I haven’t been around women for so long. But what can I do? I just have to start seeing her as my real mom.
I tighten my jaw as I try to enjoy the massage. The empress dowager’s tears keep gushing out like the Huai River when the Wangjiaba Dam[2] is opened.
“…I advised you before not to keep those improper things in the manor. You can play around, but there’s a limit with everything, all right? If only you had heeded my words, these two incidents would not have occurred. I have ordered the Ministry of Punishment to send Pei Ruoshui to death row. That wicked Wang Rui is imprisoned there as well, and I specifically ordered men to keep an eye on him so he cannot find solace in a quick death. There he shall stay until you fully recover, after which you may ask your brother for an imperial edict to kill him however you like.”
I wriggle out from her embrace – it’s time for honour and virtue!
“Empress Mother, why don’t we let those two go?”
“What was that?” Her delicately painted brows furrow as she pinches my cheeks. “Dear prince, is your head still hurting? I shall call the imperial physician to examine you.”
I brush her hand away and assume a solemn face and tone. “I am serious, Empress Mother. After two encounters with death, we realize our past mistakes. I committed many evils and well deserve to die. I have decided to change for the better and be a new, better man. Empress Mother, I think you will agree with me when I say that I am at fault with regards to the tanhua. This time wasn’t Ruoshui’s fault, either. I hit my head with the pillow of my own accord.”
Her hand clutches at her chest. “But why, dear child…”
“It was the heavens’ intentions.” I look up towards the sky with a sigh. “I committed too many sins, enough to be struck down by heavenly judgment, thrown into the pits of hell. Fortunately, heaven gave me a chance to return and lead a new life. But if I were to commit the same sins, I would hit myself for the smaller offences, and for a serious offence, I would actually be struck by lightning!”
Thrown into the pits of hell…LOL! Well, it’s too damn bad I never tried to bean actor or an insurance salesman!
Her hand tightens around her collar.
“Empress Mother, please let those two go for my sake so that I can begin a new life. Not to mention it was I who committed those hideous crimes. If we punished them, it would only smear the good name of our house and damage the righteous image of my brother, His Majesty.”
Her eyes begin to water and then close. Out like a light. I roll out of bed as the throng of eunuchs and maids rush to fan her and massage her head. Fuck me, but these maids are pretty cute. A short while later, the empress dowager comes to and pulls me close by the shoulders.
While beating on my torso, she cries, “O my prince! O poor me! O poor me! To think after fasting[3] and praying to Buddha for so many years that we would see you change for the good…”
I nod vigorously while holding a grin. Damn, it’s not easy being a good person! Can’t you be a little gentler, mamadukes? You think you’re hitting your son, but I’m the one who’s hurting!
[1] Gonggong was a suffix used for high-ranking eunuchs.
[2] A dam on the Huai River, near the eponymous Wangjiaba Town in Anhui Province.
[3] The Buddhist fast is seen as a cleansing ritual. Animal products and alcohol as well as the five spices (onion, spring onion, garlic, green garlic and chives) are forbidden, and solid food is forbidden after early afternoon. 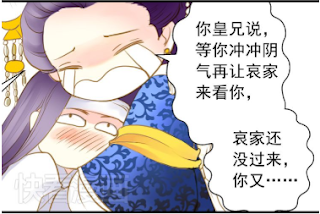