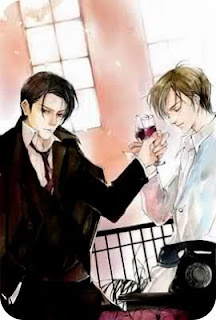 Love Late Vol. 1
The beginning...I can't wait 'til I get to the part where Ke Luo appears!

Prologue
The youth finally turned his chair around and looked up at me.  "Lee, I've decided to go back."  Silence hung for a moment before I bent down and kissed him on the forehead.  Faintly pressing his lips together, he whispered, “Sorry.”

In that moment, I felt a little sad.

Lin Jing had been with me for seven years: seven years of quarrels, of break-ups and make-ups, and of complications until he clearly fell out of love.  Yet I was still unable to give up.  Sentiments aside, he was genuinely a good kid.  When I had decided to bring him with me to LA, I had intended to stay together with him.

All it took was a call from Qin Lang to disrupt this false sense of stability in our relationship.  After all, Ling Jing was his son—of course he would want him to come back.  The sad reality was that all of the feelings that Lin Jing and I had these seven years were not strong enough for us to approach his father to get the acknowledgement of our relationship, a secret love between two men.

The check-in process was quick and I personally saw Lin Jing off at the gate.  His hair was still messy, a tousle of mischievous curls.  His face was small and his eyes dark and large as he looked back at me.  Sparing only a glance, he quickly turned around and walked, pulling his luggage along as he disappeared into the crowd.  That was the way he was.  I knew that he would miss me, though he would never admit it.

Then again, so was I.  I was a man rapidly approaching his forties, a seasoned business elite.  Pride prevented me from openly expressing these feelings.

But being alone was really, very lonely.

New comments are not allowed.